Some distributors, like US Electrical Services (USESI), consider culture as important as traditional financial results:

Employee satisfaction is linked to greater profitability. As employees become happier and feel more fulfilled in their jobs, customers receive better care and are more satisfied with their service. That, in turn, increases overall profits and lifetime customer value.

Randy Eddy, President and CEO of USESI, holds his leaders accountable for promoting a great workplace culture and his company uses a series of analytical tools to track progress and drive improvements. As a result, USESI has seen higher employee retention and incredible growth.

Eddy sat down with us to talk about why culture is so important, how to measure it and how other distributors can follow USESI’s lead.

Distribution Strategy Group: How did you get started at USESI?

Randy Eddy: A man named Richard Worthy created USESI in 2006. He planned to buy 10 companies, roll them up, and create a billion-dollar company that he could sell. It didn’t work out, though. Only about a year and a half later, the company kind of fell apart. That’s when our shareholders came in. They bought the company once Richard’s contract was up and asked me to help rebuild it.

In 2012, my team and I went in and basically built the company from scratch. We created all the processes that would make our business the best.

DSG: What does US Electrical Services look like today?

Eddy: Our company is made up of a bunch of regions, and each one generates between $80 and $600 million. In some cases, we’ll have two regions functioning out of a joint distribution center, but each one will usually have its own. We cover the Northeast. We’re like ants; every 20 miles, there’s one of us. Overall, our operation adds up to six distribution centers and about 145 locations. We’re very strong in Massachusetts, Connecticut, New York City, Philly, Delaware and others.

DSG: How and why did you start focusing on culture?

If I’m charged with building the best company of my type, that’s my goal. If I have a shareholder who will give me the resources I need to succeed and is going to leave me alone to get my job done, I’m going to do it. But am I going to build the best company possible by squeezing as much profit as I can down to the bottom line? No. You can’t put that on an advertisement to try and recruit people, right?

We also realized early on that we would need a great recruiting program. We needed magnetism, you know, how much are people attracted to you compared to how much you are repelling them. We want to be very attractive, so employees would call their friends up and say, “Hey, you’ve got to get on this team.”

So that’s why we went down this path. But, once we got here, we realized that there were other benefits we didn’t even think about. Once you start measuring culture, you start getting practical information on how to run the company. For instance, if you survey a branch and 60% of the people use the word “bullying” to describe the current state of the branch, well, someone needs to do something because we’ve got a major problem.

In other situations, employees may say they have issues with information hoarding, conflict avoidance or long hours. These answers tell you particular things that you need to work on.

DSG: What makes your training the best in the industry?

Eddy: We developed a training program for every aspect of the business, whether it’s training on products or how to be a counterperson. We also have a fantastic mechanism where we give feedback to the employee, and they provide feedback to us every two months.

We also have a management training program, which is a two-year process that we break up into pieces. Part of that is how to be a great counterperson or how to sell. We can use those modules for individual employees or our management program. With our training, we can hire someone off the street and make them a great warehouse person, or take a great warehouse person and make them a great counterperson and so on.

DSG: Can you tell us about your cultural value assessment (CVA)?

Eddy: About five years ago, we got a bunch of people together to decide the company’s mission and values. We wanted to determine what we wanted to be and how we would run the company. So, we hired a consultant who helped us initiate the cultural value assessment. We do the cultural value assessment once a year. It’s a big deal. We want to get to 100% participation, but our participation is above 90% for now.

What we do is give each employee 100 words like power, conflict, avoidance, blame, information hoarding, teamwork, accountability, etc. You know, some good words and some bad ones. Then, we ask each employee to describe the competitiveness of their workplace, their personal values, the current state of the business as they see it and their desired state of the company.

Once you do that, there are all kinds of data points you can mine. The first thing you want to look at is your participation levels. Then, you look at the first seven words employees listed as limiting values, like conflict avoidance, long hours, profit, etc. for each location. That gives you something to work on.

We get the results back, look at the data, and sit down in each region of the company and branch levels. We’ll say, “Here are the outcomes, and here’s what we need to do.”

We sometimes have very specific situations. For instance, maybe we had someone in a branch who used to work from eight to five, but we started asking him to come in two hours early to check transfers and forgot to let him get off two hours early. So we’ll pinpoint that and make changes.

When we dealt with COVID, long hours came up on the CVA. We had about 150 out of 2,000 employees who said that long hours were an issue. So we looked at what was causing that disconnect between the current state of things and the desired state.

CVA results are also significant for our region presidents because there is a positive impact on their annual bonus if they do well or improve their culture efforts. Some businesses today are losing people left and right. Maybe their competition gave them a big raise, or something else happened – there’s always some excuse. But, if you look back and see that employee loss is happening all the time without good reason, you need to talk to that leader.

DSG: How do you measure classic performance as opposed to cultural performance?

Eddy: I think everybody has some scale to measure financial performance, but some people don’t have a scale on culture. We have the same scale on both. If you have a terrible year financially and you’re down 25%, you can argue that the market or some other dynamic caused you to perform poorly. But, there’s no argument for a deficient culture.

DSG: There is a book by Frederick Reichheld that explores the “loyalty effect.” He says that when you lower the cost of getting and serving a new customer, you have the resources to pay workers more, which boosts morale and longevity. Eventually, you get a virtuous cycle where employee loyalty feeds customer loyalty and vice versa, making you more profitable.

Could you describe what you’ve seen with your company regarding the relationship between financial results and cultural values?

Eddy: If you go back to when our culture started to improve, you’ll see that our operating income and percent of sales improved the same relative amount. Overall, we’ve always improved on both fronts.

Initially, we weren’t able to move the needle very fast on culture because we didn’t know what we were doing. So it’s a learning experience, and it takes a couple of years in the beginning. We still have plenty of work left to do as far as culture goes, but we don’t have as much as before. 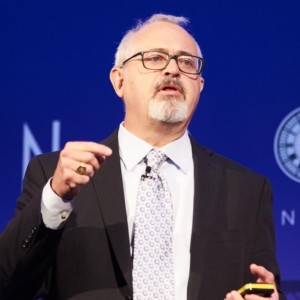 Ian Heller is the Founder and Chief Strategist for Distribution Strategy Group. He has more than 30 years of experience executing marketing and e-business strategy in the wholesale distribution industry, starting as a truck unloader at a Grainger branch while in college. He’s since held executive roles at GE Capital, Corporate Express, Newark Electronics and HD Supply. Ian has written and spoken extensively on the impact of digital disruption on distributors, and would love to start that conversation with you, your team or group. Reach out today at [email protected].